Adapting Copyright to a Global Internet 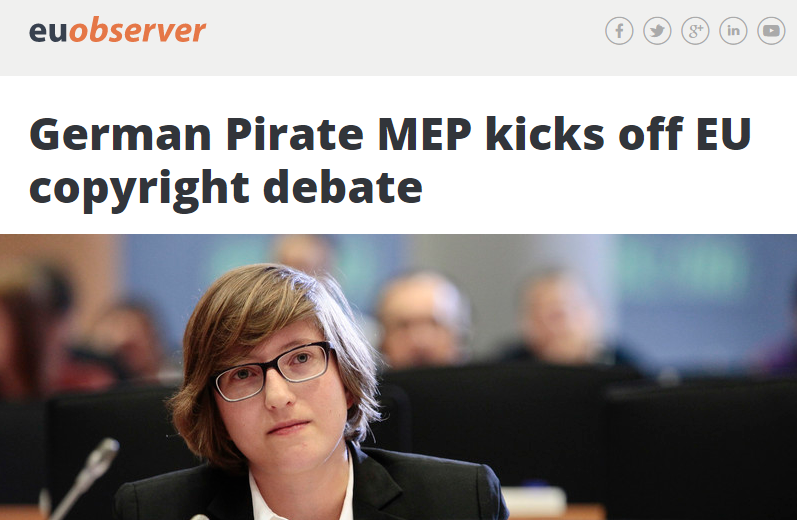 While the Internet is a global way of communication, the copyright rules are still not very harmonized. Within the EU each of the 28 member states have their own implementation of the  2001 Directive on the harmonisation of certain aspects of copyright and related rights in the information society (the "InfoSoc Directive"). The European Commission held a public consultation on the topic in 2014 with over 9 500 replies received, and a copyright overhaul is in the Commissions workprogramme for 2015. Commissioner Oettinger is expected to present a paper or proposal later this year.

The European Parliament, Committee on Legal Affairs, has now presented a draft own-initiative report on the implementation of the InfoSoc Directive. Rapporteur MEP Julia Reda, Pirate Party member of the Greens/European Free Alliance, tells that the draft preparation meant she (also) had to speak to lobbyists for collective right agencies, sometimes leading to "an awkward situation". "Some lobby organisations have written to the Greens and the Social Demcrats urging them to present another candidate", Reda told EUobserver. Reda stressed that she is not proposing “getting rid of copyright and staging a revolution” but “adapting” copyright rules.

Reda writes in her blog that the report calls for the harmonization of copyright terms and exceptions across Europe, new exceptions for emerging use cases like audio-visual quotation, e-lending and text and data mining, as well as the adoption of an open norm to “allow for the adaptation to unanticipated new forms of cultural expression”. It recommends “exempting works produced by the public sector […] from copyright protection” and demands that “exercise of exceptions or limitations […] should not be hindered by technological measures”.

It is interesting that IPR is now also discussed within the framework of the Transatlantic Trade and Investment Partnership (TTIP), a proposed free trade agreement between EU and USA. Harmonization at this level seems to be a challenge. For example wrote the The Library Copyright Alliance, consisting of three major American library associations, back in 2013 that because the EU generally provides higher levels of protection for copyright and related rights, including features that probably violate the U.S. Constitution,  TTIP should not address intellectual property. So far IPR is not excluded, and sooner or later Internet will push forward a harmonization at the global level.