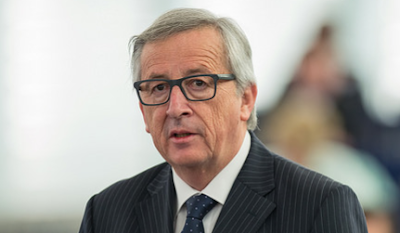 After years with a Commission looking like a bystander to the crisis management of the European Council, President Juncker finally had the leading role yesterday. He presented a White Paper on the future of Europe.

The White Paper, which gives "reflections and scenarios for the EU27 by 2025", is interesting, and the Juncker commission deserves credit for this initiative.

1:  Carrying On
2:  Nothing but the Single Market
3:  Those Who Want More Do More
4:  Doing Less More Efficiently
5:  Doing Much More Together

Together they cover critisism of the status quo and the different views of which reforms are needed. There are many overlaps between each scenario, and they are therefore neither mutually exclusive, nor exhaustive.

The White Paper does not recommend one of the scenarios, the purpose is to inspire a broad discussion in the coming months. Then, in his State of the Union speech in September 2017, Juncker will present his personal views.

To preserve and strengthen the EU, a combination of number 2 and 4 seems to be a possible path to follow. Number 3, which is already a reality for some areas, should not be the vision for the future of Europe. This scenario means several unions - not a common European Union.